A week ago I participated in the langjam weekend. This was a weekend full of coding dedicated to the creation of a programming language. I had various ideas before it started, but I threw them all overboard once the theme was announced: "Beautiful Assembly". I could only work on one thing; something I had been thinking about for many years. I'm glad I did. I created Apilar, an artificial life system.

Let's first sketch the context: artificial life, or alife. This is a fairly obscure topic that has interested me for a long time.

Biological life is marvelously creative -- evolution has thrown up all sorts of fascinating creatures, and their behavior individually and in the aggregate leads to yet more interesting phenomena.

The idea of alife is to learn more about biological life by examining simulated life. Going beyond relatively simple simulations, alife is interested in topics like open ended evolution and emergent properties. Can we create artificial systems that display various interesting properties of life?

So how might one do that? There are many approaches. Back in 1991, an ecologist named Thomas Ray had a brilliant idea: he created a computer program he named Tierra. This modeled a virtual computer, with memory and an imaginary assembly language. In this language he wrote a replicator: a program that would copy itself in memory. To this he added mutation: sometimes random memory locations would be modified to random different instructions.

This sets up the preconditions for evolution:

Fascinating stuff started to happen when Tierra runs. The original human designed replicator was optimized by evolution and faster replicators took over. A form of viral parasitism evolved where some replicators would use the copying procedure of others to make copies of themselves. This leads to predator/prey dynamics.

All this fascinated me, so in the mid 90s I set out to create a simulation of my own inspired by it. I named it Cielo. I've long since lost the C++ source code.

In Cielo, replicators live on a 2d grid. Each location on the grid has its own memory. The assembly language I designed allowed programs to move in the grid, split into two programs (one goes into a neighboring location), and merge with a neighboring replicator. Multiple processors could exist in a single locations.

There was also a notion of resources where resources would need to be harvested from the environment in order to grow, and dying replicators would be turned back into resources.

I saw interesting things emerge: replicators would quickly evolve to move around to graze for resources, replicators became more efficient, and evolved new looping code to help with moving around and harvesting resources.

I never did anything with Cielo, but other people did take the idea of Tierra much further and implemented a system called Avida and published a lot of academic research on it, including in prestigious journals like Nature. I'm happy to be acquainted with one of the creators of Avida: Charles Ofria.

Over the years, the idea of Tierra-like systems never let go of me. I kept tinkering with half-baked simulations based on the idea, leaving them half-finished. I would get stuck in ambition usually, and then move on to another hobby project in my spare time.

So langjam was a great way to become less ambitious and actually finish something. I had 48 hours. Go!

Apilar ("stack" in Spanish) is a Tierra-like system that's based around the concept of a stack machine. There are no registers, and instead instructions operate on the stack. So, for instance this apilar program calculates (5 + 7) * 8:

Besides the basics of arithmetic, logic and control flow, Apilar has a bunch of instructions to help with replication: reading from memory and writing to it, starting up new processors and splitting a computer into two.

And I did it. I got it all working in 48 hours (with sufficient sleep! sleep is important). At the end Apilar had simple text-based graphics, a command-line UI, it regularly dumped the whole simulation to disk for analysis.

Before the langjam was over I wrote (and extensively debugged) my first replicator and let it go in the simulation:

And in a text-mode view of the world, I saw this: 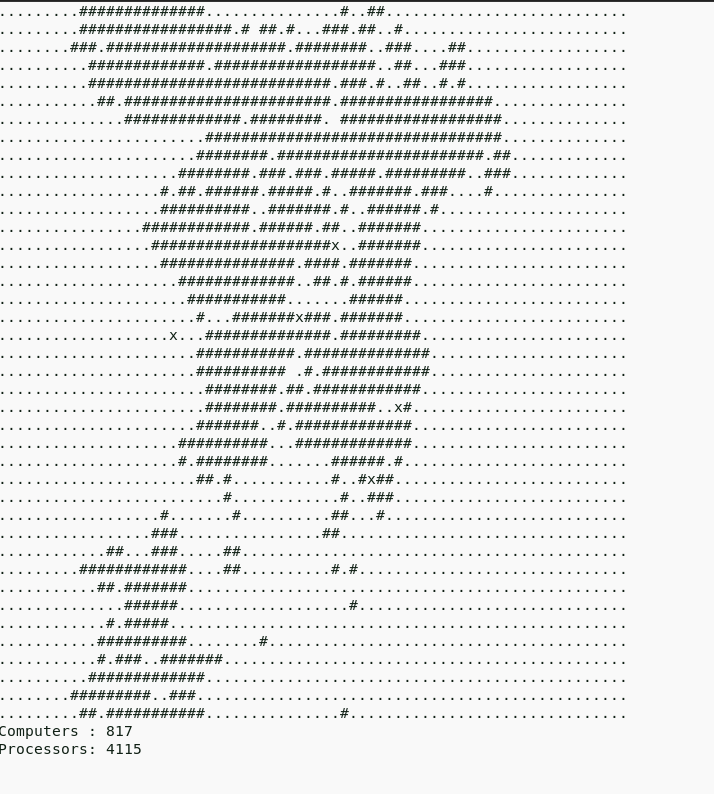 Every # is a computer, with one or more processors on it. The rest (., x) are indicators of free resources in the area without computers. What you see here is a replicator that has managed to spread to quite a few new locations, starting to fill the map.

After a while, due to mutations, new behavior would emerge and the evolutionary process would be off into an unknown direction.

Apilar wasn't a langjam winner. Here's a video of who did win, a lot of neat stuff. My congratulations to the winners!

And I got Apilar, prize enough. So what happened next?

The introduction of death

I started to explore Apilar runs in more depth, letting it run for a while. I noticed that simualtions would tend to peter out and replication stopped. What happened?

I speculated that it was due to overcrowding: it was too hard for a computer to die. When the map had filled up, replicators would be locked in place unable to place copies of themselves in neighboring locations. After a while they would all be mutated out of functioning, and that would mean the end of the evolutionary process.

So paradoxically in order to have life, I needed to introduce death. I introduced a simple measure where randomly some computers would be wiped out. This would create enough space for replication to sometimes succeed. After this modification, simulations would continue to run indefinitely, so I think my hypothesis was correct.

It turns out my original replicator sucks. Those 6 NOOP instructions in the beginning for instance were quickly dropped. Substracting 2 in the end before split also turned out to be unnecessary.

An Apilar computer in the default configuration supports up to 10 processors. Each update of a computer would run all the processors at the same time, so there was strong selective pressure to use this CPU time for useful purposes.

Eventually a descendant evolved that would grow much more quickly than before. My 10 year old son Marcus watched the simulation and asked what would happen with it if I restricted the maximum amount of processors to 1. I knew that would fail -- 2 is the minimum for it to work. I tried with 2 processors, but it turns out the replicator did not grow. I then went to 3; still this descendant was a dud. 4 processors; still nothing. I had to go all the way up to 9 processors for it to be viable. So not only could it use all those processors, it had to. Cool! Thanks, Marcus!

I don't know why; the evolved code was clearly based off my original replicator and some regions were highly preserved, but somehow it had evolved some complex choreography that made use of it.

My original simulation had a problem: addresses are stored on the stack. When a SPLIT instruction breaks a computer in two, all addresses on the stack that point below the split point would be incorrect. Similarly with MERGE a processor could find its stack suddenly corrupted if it was on the second half of the merge. Evolution could handle that, but I wanted SPLIT and MERGE to be more equitable.

So over this weekend, I went back to an idea I implemented in Cielo: read/write heads. Addresses are no more stored in the stack but in special variables. These variables are pointers to the stack that the processor could use to READ and WRITE as well as move them FORWARD and BACKWARD. When a SPLIT or MERGE occurs, the simulation now automatically adjusts all the read/write heads to remain correct. Here's the instruction set documentation.

The same logic was also very handy to introduce insert mutations where a new random instruction is inserted into the memory, instead of the simple overwrite mutations I had before. It turns out insert mutations are very beneficial to evolution.

The whole "copy 128 instructions" business was hopelessly inefficient and quickly evolved away due to a point mutation. The jump backward 2 before the split point also was not very useful and would evolve away.

Here's one of those evolved replicators that uses MERGE, with speculative comments by me:

Interestingly it's 63 instructions long, longer than my original replicator.

The area of different sparsely and densely populated areas of the map lasted for quite a while. But a while later when I came back to it, the simulation had filled up with replicators completely. I think the prey had evolved a too effective way to counter predation -- disassembly found evidence of the use of the SPLIT instruction in the middle of a tight copying loop.

I took the MERGE replicator I showed before and restarted the map. It was viable. In time it evolved into a map with some sparse and some dense areas like I've seen before. I let it run overnight. I came back to a fairly sparsely populated fast moving world: 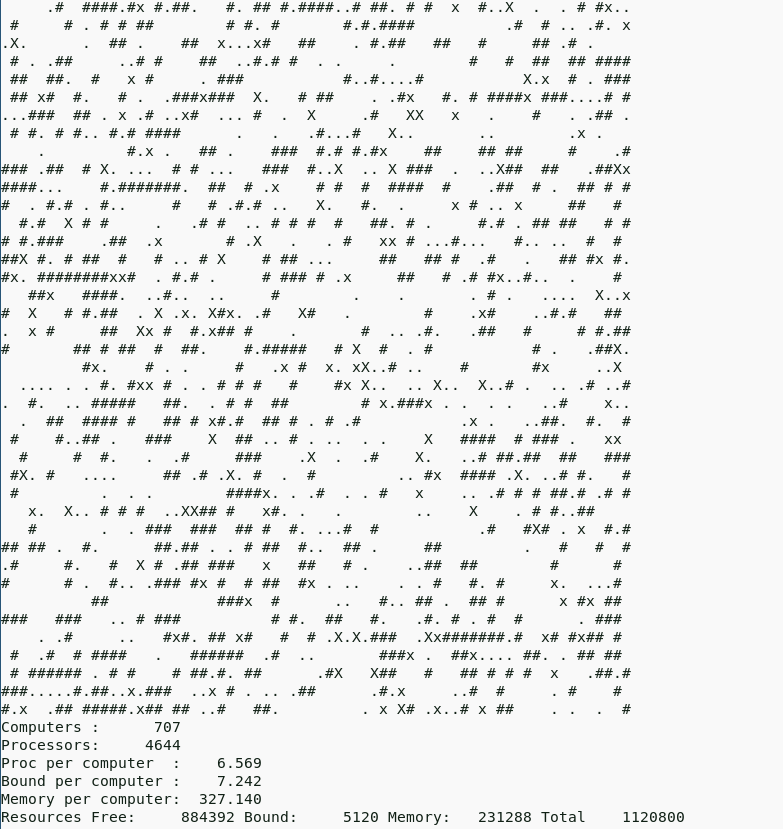 I disassembled one of the evolved replicators. I checked -- it's viable and when I seed a world with it, it results in a similar sparsely populated dynamic map. It was very long as stuff was going on I don't understand, but I managed to extract a shorter piece that seems to work. Let's try to read it.

If we try to get a value from the stack with a certain maximum, it's clamped to the range it wants using the remainder operator. For instance, there are 4 directions. Stack underflow clamped to 4 happens to be 0, which is the direction north.

It's interesting that evolution has even modified the central copying loop quite significantly: no more use of DISTANCE or LT, no more EAT, and the use of head 4 which was never in my original replicator.

The amount of use of stack underflow is interesting. If a processor runs this code with something on the stack, something else may happen entirely. I don't see any code that makes use of this, but I may be misreading it. And mutation or other replicators could definitely cause such rogue processors to appear.

I have a lot of ideas for Apilar. Here's a few.

I've been working on an improved web-based user interface for it so it's easier to explore.

I also want to introduce the notion of multiple islands -- instead of the world being a single grid, the world consists of loosely connected islands. Each island could have a different configuration, with different amounts of resources and more fundamental settings such as maximum of processors and update rules.

If you're interested in Apilar, please let me know! I'm on Twitter, email and there's also the Apilar issue tracker.

Whenever I do a hobby project, I challenge myself to learn a lot of new things.

I wrote Apilar in Rust. I learned a lot of new things about Rust and its various libraries along the way. To support the new web UI I've used Axum and Tokio for instance. And for the web frontend (in TypeScript with SolidJS) I've used PixiJS.

So I now consider myself more proficient in Rust as a side-effect.