I'm proud to announce the release of Morepath 0.16. Morepath_ is a Python web framework that is easy to use and lightweight but grows with you when your project demands more.

Morepath 0.16 is one of the biggest releases of Morepath in a while. I want to discuss a few of the highlights of this release here.

Morepath uses the predicate dispatch library Reg for its view lookup system and other behavior. We've rewritten Reg once again. For most Morepath users nothing changes, except that Reg is faster which also makes Morepath faster. If you want to use Reg directly, the new registration API makes it easier to use.

With Reg you can control the context in which dispatch takes place: this allows multiple separate configurations of dispatch in the same runtime. To control context, previously we used an implicit global lookup object, or an explicit but not very Pythonic lookup argument. Those are all gone. If you need multiple dispatch contexts in an application, you can define dispatch methods which derive their context from their class. This change allowed us to simplify Reg considerably and increase its performance.

This work was done by Stefano Taschini in collaboration with myself. Thanks Stefano!

This only affects us Morepath developers, but it's a significant change, so I want to highlight it here. We have a nice core team of contributors now and I hope we can attract more, after all.

I've been a happy buildout user over the years, so of course I used it for Morepath's development setup as well. But for a Python-only project like Morepath, pip can now do what buildout does. Since many more Python programmers are familiar with pip, and we want to make it as easy as possible for someone to start contributing, we've taken the plunge and entirely replaced buildout with pip. Even a buildout guy such as myself has been appreciating the results.

We've updated our developer documentation to reflect the changes, so it's easy to find how to do common things. The build environment for the Reg and Dectate libraries were used to use pip as well.

This work was done by Henri Hulski. Thanks Henri!

Look at the detailed changelog for much more information, including upgrade notes.

I benchmarked Morepath quite frequently during this development cycle. To make benchmarking easier, I created a new benchmarking tool called howareyou. It can not only benchmark Morepath, but can also benchmark other web frameworks -- Michael Merickel has in fact been using it already to help optimize Pyramid. You can find the howareyou tool here . The origins of this tool ultimately go back to work by wheezy.web creator Andriy Kornatskyy.

Morepath uses Webob for its request and response implementation. I learned quite a lot about Webob performance characteristics during this development cycle. This allowed me to make performance tweaks in Morepath.

It also let me detect that Webob's development version had some performance regressions that affected both Pyramid and Morepath. I'm very grateful to Bert Regeer for picking up so quickly and thoroughly on my reports of performance problems in Webob, and the Webob development version is currently actually slightly faster than release 1.6.1. 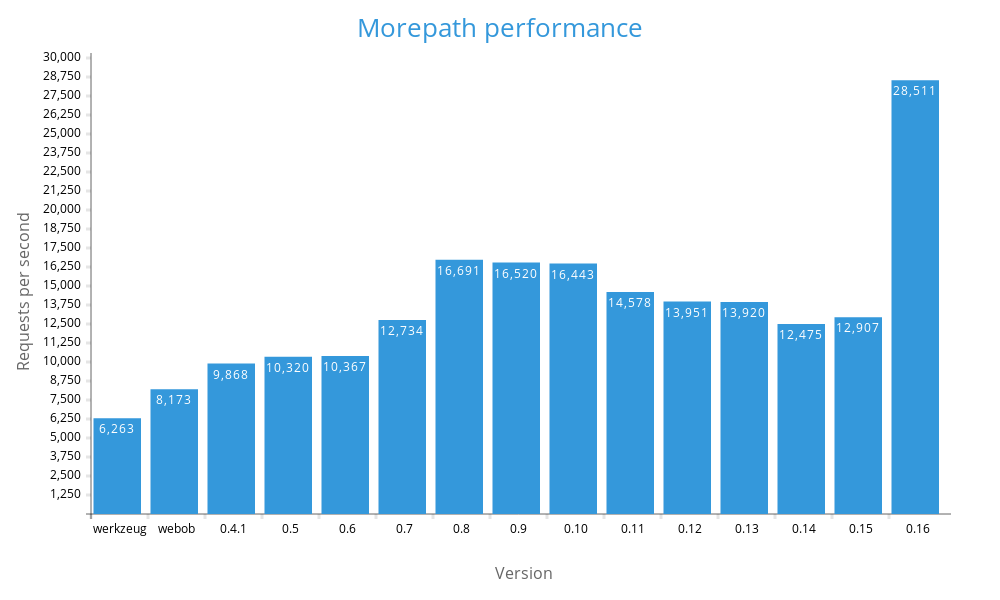 Let's compare Morepath with some other carefully selected frameworks: 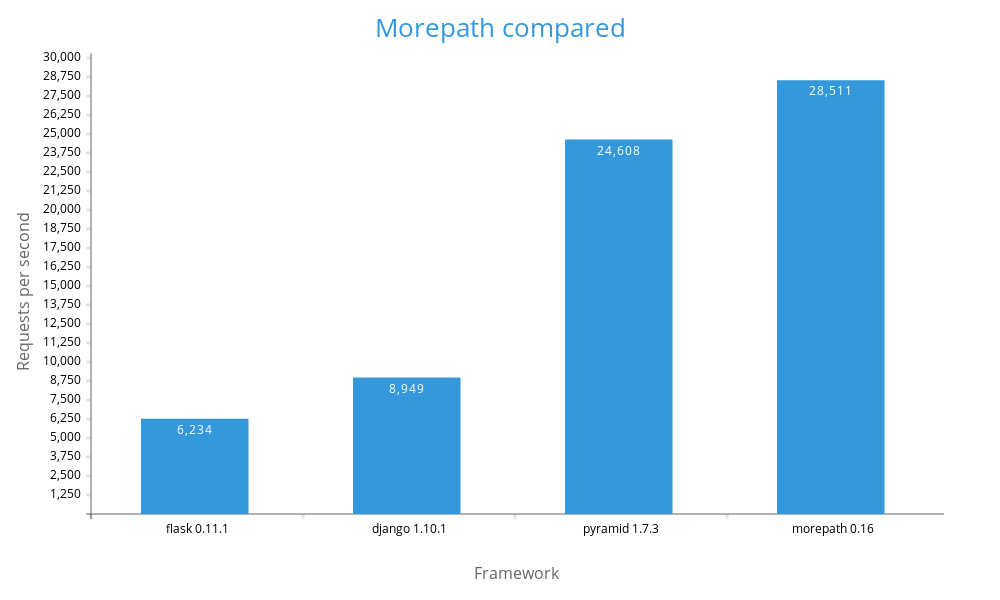 Cool, Morepath 0.16 is actually faster than Pyramid at this point in time! I don't expect it to last long given that the Pyramid devs already using howareyou to optimize Pyramid, but it's nice to have such a moment. And I deliberately didn't include Falcon, Bottle or wheezy.web in this comparison, as that would rather spoil the effect. Do remember these are somewhat silly, synthetic benchmarks. It's rare indeed that Python web framework overhead is going to affect real world performance, but at least Morepath isn't the slowest one, right?

I hope you all enjoy the fresh new release. Do get in touch with us!