At the Python language summit there were calls for a Python 2.8. Guido reports:

We (I) still don't want to do a 2.8 release, and I don't want to accelerate 3.5, but I do think we should make things better for people who have to straddle Python 2 and 3 in a single codebase, by developing more tools, and by security and possibly installer updates to 2.7 (PEP 466).

At his keynote at PyCon, he said it again: 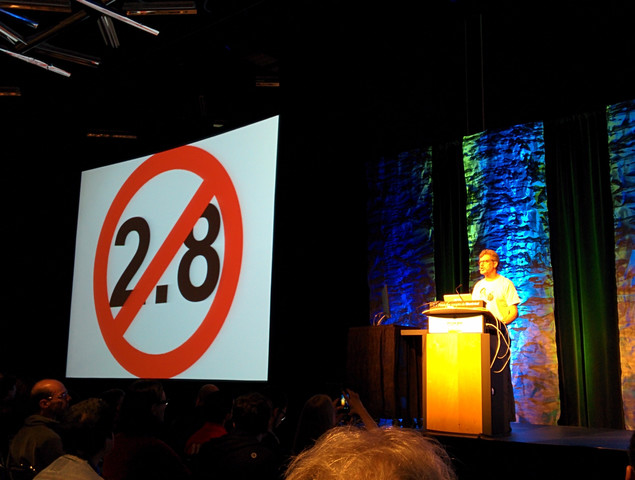 A very good thing happened to recognize the reality that Python 2.7 is still massively popular: the end of life date for Python 2.7 was changed by Guido to 2020 (it was 2015). In the same change he felt he should repeat there will be no Python 2.8:

The call for Python 2.8 is strong. Even Guido feels it!

People talk about a Python 2.8, and are for it, or, like Guido, against it, but rarely talk about what it should be. So let's actually have that conversation.

Why talk about something that will never be? Because we can't call for something, nor reject something if we don't know what it is.

Python 2.8 could be different things. It could be a Python 2.x release that reduces some pain points and adds features for Python 2 developers independent from what's going on in Python 3. It makes sense, really: we haven't had a new Python 2 feature release since 2010 now. Those of us with existing large Python 2 codebases haven't benefited from the work the language developers have done in those years. Even polyglot libraries that support Python 2 and 3 both can't use the new features, so are also stuck with a 2010 Python. Before Python 2.7, the release cycle of Python has seen a new compatible release every 2 years or less. The reality of Python for many of its users is that there has been no feature update of the language for years now.

Why an incremental upgrade?

In the discussion about Python 3 there is a lot of discussion about the need to port Python libraries to Python 3. This is indeed important if you want the ability to start new projects on Python 3. But many of us in the trenches are working on large Python 2 code bases. This isn't just maintenance. A large code base is alive, so we're building new features in Python 2.

Such a large Python codebase is:

You can argue that I'm overstating the risks of porting. But we need to face it: many codebases written in Python 2 have low automatic test coverage. We don't like to talk about it because we think everybody else is better at automated testing than we are, but it's the reality in the field.

We could say, fine, they can stay on Python 2 forever then! Well, at least until 2020. I think this would be unwise, as these organizations are paying a lot of developers money to work on Python code. This has an effect on the community as a whole. It contributes to the gravity of Python 2.

Those organizations, and thus the wider Python community, would be helped if there was an incremental way to upgrade their code bases to Python 3, with easy steps to follow. I think we can do much more to support such incremental upgrades than Python 2.7 offers right now.

Besides helping Python 2 code bases go further step by step, Python 2.8 can also help those of us who are maintaining polyglot libraries, which work in both Python 2 and Python 3.

If a Python 2.8 backported Python 3 features, it means that polyglot authors can start using those features if they drop Python 2.7 support right there in their polyglot libraries, without giving up Python 2 compatibility. Python 2.8 would actually help encourage those on Python 2.7 codebases to move towards Python 3, so they can use the library upgrades.

But what do we want?

I've seen Python 3 developers say: but we've done all we could with Python 2.7 already! What do you want from a Python 2.8?

And that's a great question. It's gone unanswered for far too long. We should get a lot more concrete.

What follows are just ideas. I want to get them out there, so other people can start thinking about them. I don't intend to implement any of it myself; just blogging about it is already breaking my stress-reducing policy of not worrying about Python 3.

Anyway, I might have it all wrong. But at least I'm trying.

Here's a paradox: I think that in order to make an incremental upgrade possible for Python 2.x we should actually break existing Python 2.x code in Python 2.8! Some libraries will need minor adjustments to work in Python 2.8.

The Future is Required

Python 2.7 lets you do from __future__ import something to get the interpreter behave a bit more like Python 3. In Python 2.8, those should be the default behavior.

In order to encourage this and make it really obvious, we may want to consider requiring these in Python 2.8. That means that the interpreter raises an error unless it has such a from __future__ import there.

If we go for that, it means you have to have this on the top of all your Python modules in Python 2.8:

absolute_import appears to be uncontroversial, but I've seen people complain about both division and print_function. If people reject Python 3 for those reasons, I want to make clear I'm not in the same camp. I believe that is confusing at most a minor inconvenience with a dealbreaker. I think discussion about these is pretty pointless, and I'm not going to engage in it.

I've left out unicode_literals. This is because I've seen both Nick Coghlan and Armin Ronacher argue against them. I have a different proposal. More below.

What do we gain by this measure? It's ugly! Yes, but we've made the upgrade path a lot more obvious. If an organisation wants to upgrade to Python 2.8, they have to review their imports and divisions and change their print statements to function calls. That should be doable enough, even in large code bases, and is an upgrade path a developer can do incrementally, maybe even without having to convince their bosses first. Compare that to an upgrade to Python 3.

We can't do everything with the old future imports. We want to allow more incremental upgrading. So let's introduce a new future import.

New-style classes, that is classes that derive from object, were introduced in Python 2 many years ago, but old-style classes are still supported. Python 3 only has new-style classes. Python 2.8 can help here by making new style classes the default. If you import from __future3__ import new_classes at the top of your module, any class definition in that module that looks like this:

is interpreted as a new-style class.

This might break the contract of the module, as people may subclass from this class and expect an old-style class, and in some (rare) cases this can break code. But at least those problems can be dealt with incrementally. And the upgrade path is really obvious.

Why did I write __future3__ and not __future__? Because otherwise we can't write polyglot code that is compatible in Python 2 and Python 3.

Python 3.4 doesn't support from __future__ import new_classes. We don't want to wait for a Python 3.5 or Python 3.6 to support this, even there is even any interest in supporting this among the Python language developers at all. Because after all, there won't be a Python 2.8.

That problem doesn't exist for __future3__. We can easily fake a __python3__ module in Python 3 without being dependent on the language developers. So polyglot code can safely use this.

Back to the magic moment of Nick Coghlan and Armin Ronacher agreeing.

Let's have a from __future3__ import explicit_literals.

This forces the author to be entirely explicit with string literals in the module that imports it. "foo" and 'foo' are now errors; the module won't import. Instead the module has to be explicit and use b'foo' and u'foo' everywhere.

What does that get us? It forces a developer to think about string literals everywhere, and that helps the codebase become incrementally more compatible with Python 3.

This import line does two things:

I took this idea from the Python future module, which makes Python 3 style str and bytes (and much more) available in Python 2.7. I've modified the idea as I have the imaginary power to change the interpreter in Python 2.8. Of course anything I got wrong is my own fault, not the fault of Ed Schofield, the author of the future module.

from __past__ import bytes

To ensure you still have access to Python 2 bytes (really str) just in case you still need it, we need an additional import:

oldbytes` can be called with Python 2 str, Python 2 bytes and Python 3 bytes. It rejects a Python 3 str. I'll talk about why it can be needed in a bit.

Yes, __past__ is another new namespace we can safely support in Python 3. It would get more involved in Python 3: it contains a forward port of the Python 2 bytes object. Python 3 bytes have less features than Python 2 bytes, and this has been a pain point for some developers who need to work with bytes a lot. Having a more capable bytes object in Python 3 would not hurt existing Python 3 code, as combining it with a Python 3 string would still result in an error. It's just an alternative implementation of bytes with more methods on it.

This is the equivalent import for getting the Python 3 bytes object.

So what happens when we somehow combine a Python 3 str/bytes with a Python 2 str/bytes/unicode? Let's think about it.

The future module by Ed Schofield forbids py3bytes + py2unicode, but supports other combinations and upcasts them to their Python 3 version. So, for instance, py3str + py2unicode -> py3str. This is a consequence of the way it tries to make Python 2 string literals work a bit like they're Python 3 unicode literals. There is a big drawback to this approach; a Python 3 bytes is not fully compatible with APIs that expect a Python 2 str, and a library that tried to use this approach would suffer API breakage. See this issue for more information on that.

I think since we have the magical power to change the interpreter, we can do better. We can make real Python 3 string literals exist in Python 2 using __future3__.

I think we need these rules:

So while we upcast existing Python 2 unicode strings to Python 3 str we refuse any other combination.

What have we gained?

We can now start using Python 3 str and Python 3 bytes in our Python 2 codebases, incrementally upgrading, module by module.

Libraries could upgrade their internals to use Python 3 str and bytes entirely, and start using Python 3 str objects in any public API that returns Python 2 unicode strings now. If you're wrong and the users of your API actually do expect str-as-bytes instead of unicode strings, you can go deal with these issues one by one, in an incremental fashion.

For compatibility you can't return Python 3 bytes where Python 2 str-as-bytes is used, so judicious use of __past__.str would be needed at the boundaries in these cases.